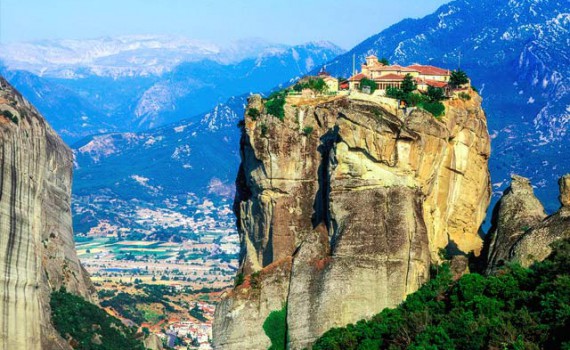 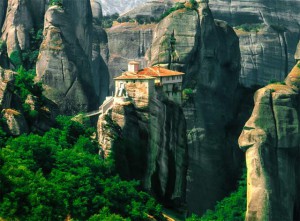 Excursion to famous Meteora . Departure from Paleros at 08.30.We have the first stop in Preveza.Then another stop in Terovo for sampling local cheese and milk pies. Through Ioannina we go to the most famous villa of Zagoria (Monodendri) and we spend two hours for lunch and visit the monastery of Profitilias. Then we drive to Meteora. Next step we visit the monasteries of “Grand Meteora” for one hour and then we visit the monastery “Agios Stephanos” and stops at Agias Trias for 40 minutes. Meteora: Meaning  “suspended in the air” one of the most amazing places in Greece. Everyone is impressed by the monasteries perched on top of enormous rocks and have probably wondered how on earth they built them.

The rocks themselves are impressive, rising from the plains of Thessaly a few miles northwest of Kalambaka.

It is a strange but breathtaking landscape that has been sculpted by wind and water over thousands of years.

By the 14th century, the Byzantine Empire was already on the wane and the monastic communities of Athos peninsula were increasingly besieged by Turkish pirates.After an encounter with brigands, three monks,Gregory,Moses and Athanasius,left the Monastery of Iviron on the western coast of the peninsula to search for a new home.They had heard of ‘miracles’taking place in the land of the great rock forestand on arriving there,settled on top of the rock called Stylos or the Pillar where they built a hesychasterion or wooden hut.Later, Athanasius assembed a small community and constructed a few cells and a chapel in a cave on the nearby Platys Tithos or the Broad Rosk.The Serbian Emperor,Symeon Uros provided them with an endowment that allowed them to build the Church of the Transfiguration around 1356 and to expand the monastery with more cells and cloisters.His son,John Uros,retired here as a Monk Ioasaph about 1373 adding to the already sizable endowment enjoyed by the Grand Meteoron,also known as the Monastery of the Transfiguration.Ioasaph assumed authority upon the death of Athanasius in 1383 and he further expanded the monastery and the Church.On the way back, we stop at Metsovo for lunch and to explore this nice village. We arrive back in Paleros approximately 19.00.

Thank you for choosing Paleros Travel and hope you have had an unforgettable holiday experience.