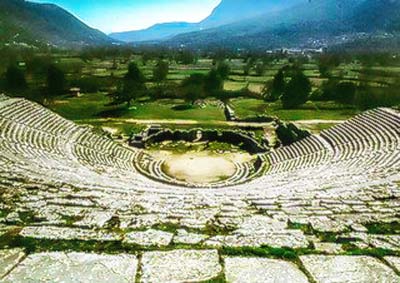 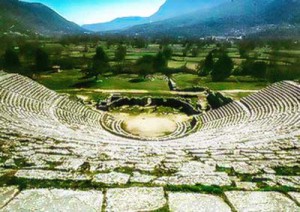 The ancient site of Dodona remains on the site date from the prehistoric period and the first deity worshipped here was the Earth goddess. The cult of Zeus and the sacred oak tree was brought to Dodona by the Selloi, a branch of the Thesprotian tribe, between the 19th and 14th centuries B.C. and soon became the prevalent cult of the sanctuary.

The first offerings from southern Greece date from the end of the 8th century B.C. and building activity began in the 4th century B.C. The sanctuary reached the highest point of its prosperity in the 3rd century B.C. but was destroyed by the Aetolians in 219 B.C. It was rebuilt shortly thereafter and continued to be in use until its destruction by the Roman invaders in 167 B.C. In the Roman period it had a different function and its end came in the 4th century A.D., during the reign of Theodosius the Great. The area of the sanctuary was then covered with Christian basilicas. Today the theatre is used for performances.
Systematic restoration work in the theatre, the stadium, and other monuments of the site started in 1961 and was based on the study of the architect B. Charissis. The whole project was financed by the Archaeological Society and the Program for Public Investments. Until 1975, the greatest part of the theatre had been restored, except for the third diazoma.

Thank you for choosing Paleros Travel and hope you have had an unforgettable holiday experience.